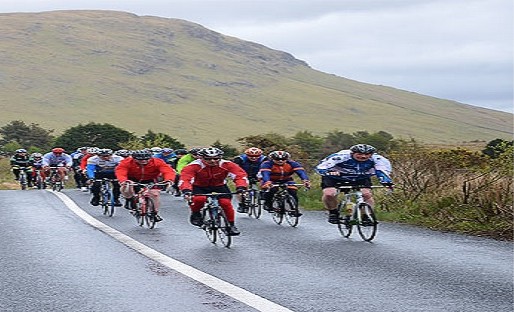 Michael G. Ryan of the firm linked up with our law enforcement colleagues, from the Galway division of An Gardai Siochana when he participated in the Croagh Patrick challenge recently with proceeds going to Ability West.

The challenge involved a cycle from Galway to Westport followed by a climb of Croagh Patrick with a return cycle to Galway the following day.

The cycle was in two stages. About 70 cyclists left Galway at 7.00 am heading for Maam Cross. The weather was kind for this leg of the journey but the skies looked ominous as the hilltops were not visible from the west.

The group was well serviced by motor-bike Gardai, volunteers with motor-bikes as well as support vehicles. All uniformed Gardai were working on their time off and were using sponsored fuel at no cost to the tax-payer. Traffic management was superb throughout the entire weekend with the motor-cycle Gardai operating a one-system to allow convoys of cars pass the cyclists from time to time.

The entire peloton then moved towards Westport via the beautiful Delphi valley. Lunch was served at the Delphi Adventure Centre and with wonderful service from the volunteer group supporting the cycle.

However, the beauty of the valley was not fully apparent on the day as the weather was unkind. A cold north wind and lashing rain which at times turned to hailstones made for a difficult and uncomfortable ride to Westport. The subsequent climb of Croagh Patrick was even more difficult as the bad weather and howling wind reduced visibility to a short-distance and literally created a stream of water coming down the mountain.

The participants were not daunted by the elements and most of the group made it up and down the mountain having to mount their bikes again for the last few kilometres to Hotel Westport.

A most enjoyable night was had there with groups of supporters joining the cyclists for a function followed by plenty of craic! Rumour has it that some of the hardier souls were still singing in the residents bar sometime after the dawn chorus began in the Westport woods.

The trip back to Galway on Sunday was a joy as weather conditions were perfect. The entire group arrived back safely to the finishing post at the Salthill Hotel having raised a substantial sum for charity.